Driving Ambition, a tale of murder, labour politics and self-driving cars, is now available as an e-book in Kindle and Kobo formats. Print copies will be available to order later, but some advance copies might make their way to the BSFA's interview event with Fiona Moore next Wednesday. Please come if you're in the London area!

In the meantime, here's a tortoiseshell cat contemplating her new copy... 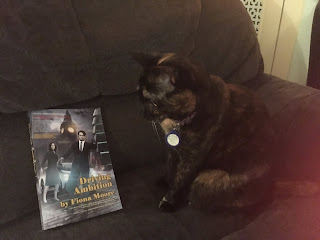 Regeneration Special: It's a Two-Fer!

With the new season of Doctor Who starting, Magic Bullet brings you not one but two articles exploring the series. First, Rose No More by Alan Stevens speculates on what became of Rose after the changes in history happened on the Eleventh Doctor's watch. Following that up, we've got The Doctor's Kill List by telefantasy expert Mike Kenwood, figuring out the number of times that The Man Who Never Would, um, did.
Posted by Fiona at 13:23