Praise for "The Black Archive: The Robots of Death"

Fiona Moore's book for The Black Archive on "The Robots of Death" (including a section on Kaldor City of course) is shortly to be released. And Sci-Fi Bulletin apparently approves:

""Fiona Moore loves The Robots of Death as much as we do, unravelling the various threads that combine to create a pretty much perfect story. And as much as you might think you know there’s nothing new to say here, you might just be surprised. 9/10""

You can pre-order the book here.
Posted by Fiona at 06:18

End of the World?

What better article to publish this month than one concerning the writing process of Terry Nation, who wasn't obsessed with plagues in the slightest, not at all. Read World's End and get a rare glimpse at the first draft of "The Dalek Invasion of Earth", originally a much darker and more political story, and potentially featuring the first Muslim companion in the series. To quote Alan's editorial for the Celestial Toyroom issue in which the article first appears:

"One of the key aspects of Terry Nation’s original draft is its sense that the plague and the war has stopped history, causing the future to become a blank slate, no longer predicated on what has gone before."

If you're wondering if you can still order from us during the lockdown, the answer is yes! We're coronavirus free and will ship anywhere. Here's a link to the Orders Page to help you pass the time in isolation.
Posted by Fiona at 06:42

Book bundle for the lockdown!

Stuck at home? Need something else besides your Magic Bullet CDs and MP3s to amuse you? Fiona Moore's AI mystery novel Driving Ambition is one of many great books in the Bundoran Buddies book bundle (with a bonus AI story, "Seal", included in the collection Lazarus Risen). For just $15, less than the price of a trade paperback these days, you get 12 books, including, as well as Driving Ambition, works by Robert Sawyer, Tanya Huff, Brad C Anderson and Madeline Ashby. 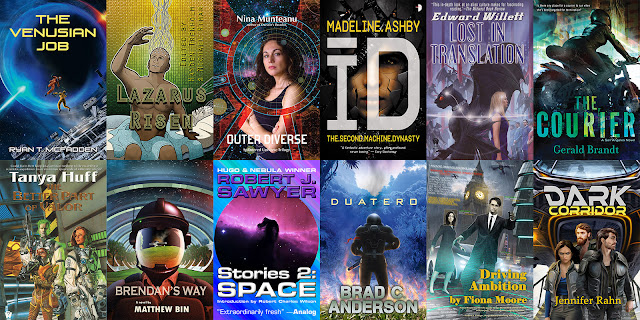