This edition is crammed with Silurians, Sea Devils, Sontarans, and War Machines. We take a detailed look at Ben and Polly, and then dissect showrunner Steven Moffat’s affair with The Time Traveler’s Wife. There’s a character study of Taren Capel, while, finally, we say our goodbyes to actor David Bailie.

Further thanks should go to Andy Lambert for his awesome, wrap-around, full colour cover and to JL Fletcher for providing us with yet another in his series of collectible Doctor Who postcards.

When I prepare my editorial for Celestial Toyroom I look for a theme that ties everything together, and then later, for the Guest Editor’s blog, I search for a fresh angle on the issue’s contents.

This time I’m focusing on the notion of duality.

Monsters in Doctor Who frequently represent the hostile 'other', intent on invading or manipulating our planet for their own nefarious ends.

As the series was created and has existed for the most part during the Cold War, it’s not really surprising that foreign invasion should feature so heavily in its stories.

Then there is the fear of new technology, with the Post Office Tower, a centre of civilising communications, providing the headquarters for the murderous computer WOTAN, enslaving us through mind control.

When we come to the Silurians and Sea Devils, things become a little more complicated. Their advanced cultures inhabited the Earth when we were still apes, but it should be recognised that three out of four of their TV adventures end with that particular cell of Homo Reptilia being destroyed, while their last major appearance had them return to hibernation for the next thousand years. A voice-over tells us that “common ground” was finally achieved with the “race known as Humanity”, but we never actually find out how this was done.

The only Aliens to date we have seen successfully coexist on Earth with humans are the Zygons, and even then this was only accomplished by them concealing their true identities and shape-shifting into human form — with the fear of genocide hanging over them if their presence in society was ever detected.

Possibly the most sophisticated monster in the series was Taren Capel: a man whose mind was twisted out of shape from being raised as a child exclusively by robots.

Indeed, Dask, nee Taren Capel, with his dual identity, one calm and measured, the other a boiling cauldron of confused and conflicting emotions, may reveal the quintessential core of Doctor Who:

that trying to slay the “monsters from other worlds” is ultimately futile, as they are simply projections of our own fears made manifest.

Alan Stevens (with thanks to Marianne Williamson) 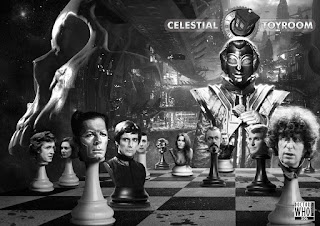 We've been doing a little housekeeping, and have provided updated versions of the Celestial Toyroom #506 pdfs on this website: improving resolution, making a few design changes, and adding a cleaner version of the postcard. This issue is a The Robots of Death/Kaldor City special (which has now been downloaded over four and a half thousand times!), so well worth checking out. Download the landscape version here, and the portrait version here.

Email ThisBlogThis!Share to TwitterShare to FacebookShare to Pinterest
Labels: Doctor Who, Kaldor City

Celestial Toyroom #516, edited by Alan Stevens, is now at the printers'. Preview the contents on the Doctor Who Appreciation Society website here! 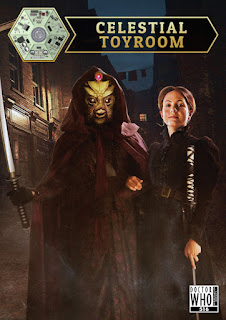 Magic Bullet productions are very sad to report the death of the actor David Bailie, who brought Taren Capel so memorably to life, and was a huge supporter of the Kaldor City CD series.

Our thoughts are with his family. 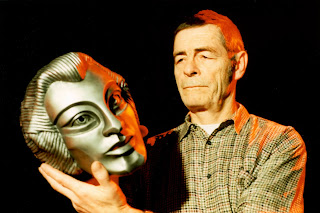