And here we are again!

Physics teaches us that every single particle in the universe has a gravitational effect upon every other particle, no matter how great the degree of separation between them. This unified effect supports the theory that all events are related in some way. Synchronicity can then, in turn, be seen as merely a very personal and subjective observation of this inter-connected universe, of which we are but a small part.


The Robots of Death has always been a personal favourite of mine, and so when I was given an opportunity to build an issue of Celestial Toyroom around Fiona Moore’s critical monograph for The Black Archive, my first concern was how the hell could I pull it off?

I was the producer of Magic Bullet’s Kaldor City audio plays, and, although it’s been several years since there has been any addition to the series, the compact discs and downloads still sell, and I am frequently asked questions about the story… which is a little problematic in that Kaldor City was written to be a mystery with many possible answers, not a secret, which, by definition, can only have one.

So although an article on the Kaldor City plays was a necessity, it was not for me to write it. Equally, any piece commissioned by myself on the subject could be seen as an indirect reflection of my thoughts, which would influence the reading of the series, causing certain narratives to become more defined, whilst other possibilities vanished.

Then, as I wrestled over and over with this philosophical Gordian Knot, Ann Worrall turned up, unsheathed her sword of shining clarity, and sundered the knot with a single stroke!
“I’ve written this article about competing narrative structures in the Kaldor City audio plays,” she said.

In conclusion, I’d like to thank Andy Lambert for his highly surreal wrap-around cover featuring a Voc robot playing a metaphysical game of chess, and JL Fletcher for yet another awesome full colour postcard, this time depicting the Fourth Doctor, Leela and the crew of Storm Mine Four.
Kindest regards,

Alan Stevens (with thanks to Chris Boucher) 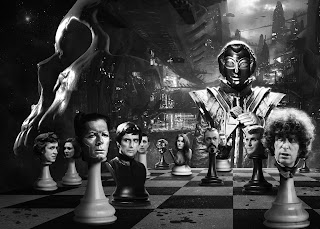 Fiona's book on The Robots of Death is available here: https://obversebooks.co.uk/product/43-robots/
Posted by Alan Stevens at 08:41