A SUMMONING OF SHADOWS

Doctor Who is always an imperfect shadow of the perfect, ideal image of the programme you have in your head.

When I watched the show as a child, I never noticed its flaws. Indeed, how could there be errors in what for me seemed thrilling and real?

As I entered my teenage years, I noticed every imperfection and was depressed by them, but in adulthood, I recognised a deeper meaning below the surface adventure, and production shortcomings no longer bothered me; to the point where I considered anyone who whined on about them immature, or even worse, foolish.

Was adult me unreasonable in my analysis?

I don’t think so.

Doctor Who was made on a TV budget, so, surely it was the characters, the dialogue and the plots which were the main draw, not the odd dodgy piece of CSO, or chipped Dalek.

It was something entirely different if the narrative failed to convince me, if the dialogue was clunky, or an actor performed badly, and on those occasions, I was less forgiving!

Then the BBC decided to finish with Doctor Who, and I was informed by various media bods that this was because it was unable to compete with Star Wars’ special effects.

To their minds, sci-fi was primarily about spaceships, robots, monsters and derring-do, with plot and characterisation a poor second.

All of which would either suggest that good storylines and memorable characters were not a part of the Star Wars universe, or conversely, the smug, self-satisfied pundits saying these things had no idea what they were talking about.

And yet, when Doctor Who returned for the twenty-first century, there appeared to be a huge emphasis on the look of the series, to the extent where spectacle usurped everything else. Whilst any criticism in those early years was treated as a form of heresy.

It was as if the production team, together with a significant portion of Doctor Who fandom, had absorbed all this clichéd nonsense about what sci-fi should be and were now using it as a stick to beat dissenters.

Today, 17 years down the line, a large contingent of fans complain about the scriptwriting, saying it’s too preachy and the programme should instead be concerning itself with spaceships, robots, monsters and derring-do…

So how about this for a thought?

Maybe that flawless, ideal model of Doctor Who those critics have in their heads is, rather, the imperfect shadow of a TV series which no longer exists, and that they themselves were complicit in erasing.

Kindest regards,
Alan Stevens (with thanks to Plato)

Finally, this is Andy Lambert's suberb wrap-around cover, minus the Celestial Toyroom logo and issue number. 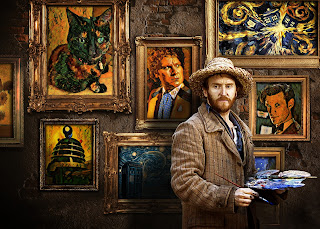